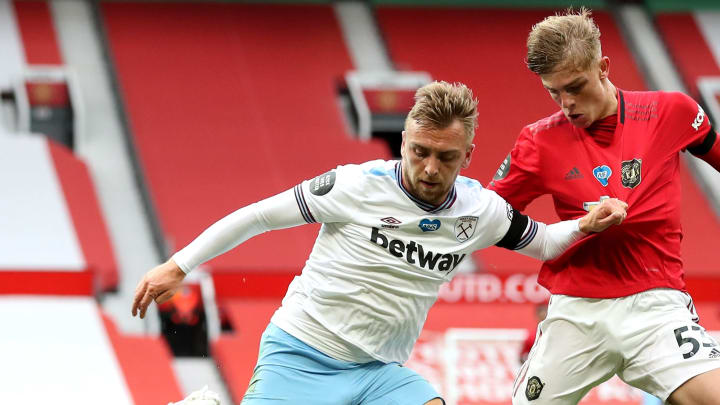 West Ham Must Build Their Team Around Jarrod Bowen Next Season

It won’t be by any great margin, but West Ham will remain a Premier League side for next season. But a summer of healthy spending and escalating ambition was not meant to lead them here. Europe was supposed to be the goal.

A late mini-revival in recent weeks has spared their blushes and confirmed they won’t be among the three worst teams in the division. Don’t be fooled, though, this is not a particularly good Hammers side.

Victories over fellow strugglers Norwich and Watford were the magic ailment to prevent disaster, but over the course of the entire season they’ve been desperately off the pace and lacking quality in a variety of areas.

One such deficiency was addressed in the January window, as the last-minute manner of their purchase of Jarrod Bowen proved to be a deal worth sweating over. Since the restart he’s laid on four assists to his teammates, all while operating in a right wing role.

It’s a position he played in at times for Hull before the move south, but in a system that encouraged him to drift infield to either support the striker he essentially operated as a centre forward.

He’s been tasked with far greater defensive responsibilities under David Moyes but has impressed with each performance. What stands out as a key quality with Bowen is that he’s always lively. Hugging the touchline and demanding a ball in behind or calling for possession deeper to spark a one-two are common occurrences throughout each 90 minutes.

Most comfortable on his left foot, there is a tendency to cut inside and bend a cross in for – usually – Michail Antonio. Brandon Williams came up short against him at Old Trafford, struggling with Bowen’s pace on either foot and getting his mind in a tangle trying to anticipate what move he was going to make next.

That aforementioned crossing shouldn’t be as forthcoming, however. West Ham need to realise the strengths in Bowen’s game and play to them. You’d like to think Moyes knows that, and that the only reason for playing him so wide being they’ve needed that defensive stability to claw their way adrift of relegation.

If that is the case then next season we might see Bowen play more centrally, turn those crosses into shots and play inside the full-back as opposed to outside him.

This is a 23-year-old with serious talent who’s only going to get better, but due to the Hammers’ midfield being so unbelievably slow, he’s been forced to play on that right hand side so to balance area.

Akin to the Duracell bunny – other batteries are available – he runs until his boots have worn off. It will come as no surprise that with a player who doesn’t stop running, the rest of the West Ham side have started running too. Energy such as his is infectious, with the youthful exuberance he offers bringing a whole new dimension to this Irons side.

That can be built on, though, and ensuring he has the platform to maximise his talent will be crucial to making sure there isn’t another miserable season to contend with in the Premier League next term.

Maybe, just maybe, they can enjoy some more fine displays from him like we saw at Old Trafford, and maybe they can keep picking up points on the road such as these? Who knows, but Bowen is key to all of it.