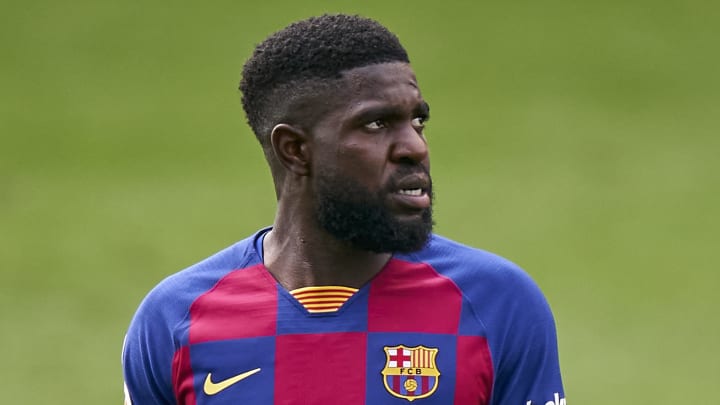 Samuel Umtiti is attracting interest from West Ham and Everton, according to reports in Spain.

The Barcelona defender’s career has been littered with injuries of late. A string of ailments have restricted Umtiti to just 27 La Liga appearances over the past two seasons. Most recently, the Frenchman was ruled out for the rest of the 2019/2020 campaign back in June due to a knee problem.

Because of these issues, Barcelona are open to the prospect of selling Umtiti and Mundo Deportivo (via Sports Witness) have reported that he is attracting Premier League interest.

Prior to his latest injury setback both West Ham and Everton enquired about his availability with Lyon, Marseille and Rennes similarly getting in contact with the Catalan giants. In the past Manchester United, Chelsea, Arsenal and several Serie A teams, including Juventus and Napoli, have also been linked.

Although Umtiti wants to remain at the club, Barça seemed to have lost patience with the World Cup winner. Quique Setien’s side have struggled at the back this season and the frequent unavailability of the 26-year-old has been a source of frustration.

It is unlikely that any club would be willing to pay a fee for the injury prone player before he can prove his fitness. That is why Barcelona are planning to structure the deal as a loan move with an option to buy at the end. Whether or not such a deal would entice Carlo Ancelotti or David Moyes to make a concrete offer remains to be seen.

Umtiti could partner Tomas Soucek at the back for the Hammers. The club recently announced that the Czech Republic international had joined permanently on a four-year deal from Slavia Prague. Soucek has impressed on his loan, particularly since the Premier League returned in June.