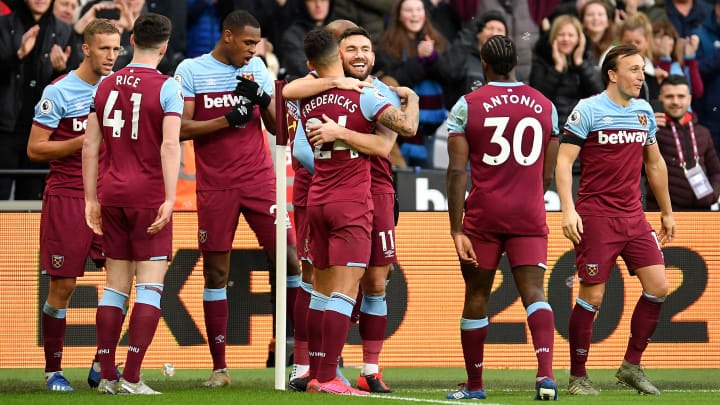 West Ham fans entered the season with so much hope but soon saw it all evaporate.

The supporters of this famous old club finally got their wish in the summer of 2018, when an exciting and proven south American manager was appointed and the owners dipped into their pockets for some big-money signings. A mid-table finish was enough to raise expectations and the arrival of more expensive stars set tongues wagging.

Unfortunately for the West Ham faithful, it wasn’t to be. Manuel Pellegrini was sacked by December after a run of nine losses in 12 games left them just one point and one place above the relegation zone.

David Moyes returned to steady the ship, albeit to the displeasure of certain sections of the fan base who saw it as a regression. The club appeared to accept remaining in the Premier League for another year was now this season’s solitary goal.

After a turbulent season of ups and downs following the departure of Pellegrini, how have they got on? Here’s 90min’s report card for West Ham’s campaign.

It all started so well for West Ham. Apart from the opening day 5-0 thrashing at the hands of Manchester City, of course. But 11 points from their opening six league fixtures left them in fifth position and the early season talk was of them being contenders for European football.

Often when teams fall away it’s hard to put your finger on exactly what went wrong, but with West Ham, it appeared relatively clear. Goalkeeper Lukasz Fabianski tore a hip muscle in the 2-2 draw at Bournemouth and was ruled out for three months. In the period where the Polish shot-stopper was absent, West Ham’s season capitulated.

The former Arsenal keeper was injured on 28 September. The Irons wouldn’t pick up another three points until a shock win at Chelsea on 30 November. Fabianski’s stand-in, Roberto, burdened a large portion of the blame for the shocking run as he failed to keep a clean sheet in any of his six matches and conceded three goals in each of his last three games.

Moyes came in for his second spell in charge to stop the rot after Pellegrini was dismissed and was successful to all intents and purposes. The Irons survived to fight in the top-flight again next season but a campaign that was supposed to be a big leap forward ended up feeling like a big setback.

A comfortable 2-0 away victory to League Two side Newport County in the second round saw Jack Wilshere and Pablo Fornals score their first West Ham goals. With the Hammers’ relatively big squad and lack of European football, it appeared to be the perfect competition to blood a few new and fringe faces into the starting XI.

Pellegrini adopted the same approach for the visit to Oxford United, a League One outfit. The League Cup represented a realistic chance for a trophy and although the Chilean made nine changes, his faith in players such as Robert Snodgrass, Issa Diop and Pablo Zabaleta as well as Wilshere and Fornals to get the job done was not unfounded.

Instead, West Ham were utterly humiliated by Karl Robinson’s side. A 4-0 thrashing at the Kassam Stadium was the beginning of the former Real Madrid boss’ demise.

Moyes’ second game in charge was away to Gillingham in the third round of the FA Cup and he wisely chose a full-strength side in order to get off to a good start. The Gills put up a superb fight, but two late goals helped West Ham see off the side ranked 40 places below them in the Football League pyramid.

West Brom were next as the Championship high flyers visited the London Stadium. Moyes again selected a strong side but they couldn’t match the visitors despite Semi Ajayi’s red card late on. A solitary goal was enough for the Baggies, who lost to Newcastle in the next round.

Surprisingly, there weren’t too many contenders for this one. Mark Noble was as dependable as ever, Angelo Ogbonna held together a dodgy defence the best he could, and Michail Antonio’s exceptional late form also deserves recognition.

But one man who really stood out was 21-year-old Declan Rice. The holding midfielder put in countless outstanding displays and featured in every minute of West Ham’s campaign. The England international showed his maturity in a struggling Hammers side. He made the second most amount of tackles for a midfielder in the Premier League this season, but 33 players committed more fouls.

Without the academy graduate’s dazzling displays, the east London outfit could easily have been facing another stint in the second tier. Keeping hold of him for another year could be the owner’s biggest task over the summer break.

Although Roberto played a huge part in Pellegrini’s sacking and West Ham’s general demise, not everything can be laid at the Spaniard’s door. He joined as a backup keeper for less than £1m, so the expectation on him was never very high.

The same can’t be said of Felipe Anderson. The Brazilian joined in the summer of 2018 for £35m from Italy and lived up to the billing during his maiden Premier League campaign. Nine goals and four assists was a strong return for a player still adapting to life in England, but the former Lazio winger couldn’t repeat the feat this time around.

Just a solitary goal and four assists in 2019/20 left West Ham fans angry and bemused as to what happened to their exciting star man.

Whether West Ham fans like Moyes or not, he’s saved them from relegation twice now.

The Scotsman deserves a fair crack at the whip and the chance to bring in his own signings and create a team of his own. The club arguably oversaw their best transfer window in recent years under the former Manchester United boss, with January signings Jarrod Bowen and Tomas Soucek among the club’s best performers in recent weeks.

Hammers fans are renowned for wanting their team to play ‘the West Ham way’ and whether Moyes is the man to implement this style remains to be seen. He still deserves praise after overseeing some big wins against the likes of Chelsea and relegation rivals Watford and steadying an extremely hostile environment.

A push for European places was the aim at the start of the campaign and big-money signings in the shape of Sebastien Haller and Fornals backed up that ambition. However, things went horribly wrong and the outside impression is that West Ham’s development has taken a backward step.