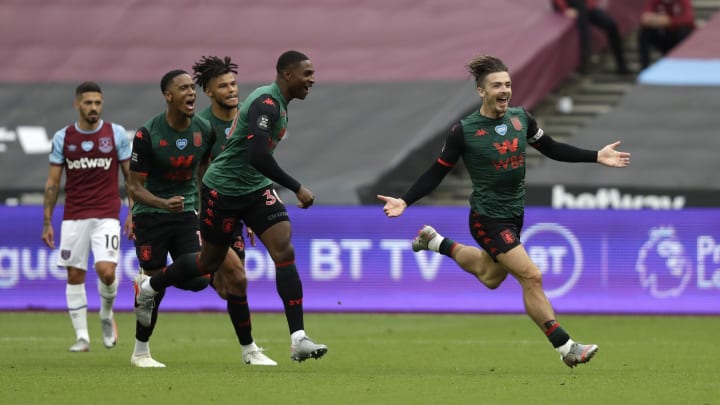 A point away at West Ham proved enough to secure Aston Villa’s Premier League survival, as results went their way on the final day of the season.

Aston Villa’s captain Jack Grealish broke the deadlock of a horribly tense affair in the 84th minute, shifting the ball onto his weaker left foot as the power of his effort beat Lukasz Fabianski.

No sooner had Dean Smith and his coaching staff composed themselves after the opener, West Ham’s Andriy Yarmolenko fired off a deflected shot which span over Pepe Reina, tantalisingly out of reach for the Spanish goalkeeper.

Given that Watford suffered defeat at Arsenal, Bournemouth’s win against Everton was ultimately in vain as Dean Smith’s side, with their nerves certainly frayed, prepare for another season in the top flight.

Villa started the match on the front foot but without creating a clear cut chance, West Ham grew into the contest. The in-form Michail Antonio squandered an early opportunity, steering a volley narrowly past the post as Villa’s backline were easily bypassed by one booming long ball from Issa Diop.

As Villa became more tentative, West Ham began to knock the ball between each other on the edge of their visitors’ area but were largely limited to long range efforts as accusations of less than full-blooded performance began to surface on social media.

It wasn’t a thrilling spectacle, and the home side were far from their best.

In a match where few West Ham players did much to stand out, 20-year-old fullback Ben Johnson performed with assuredness which belied his youth. In just his third Premier League appearance of the season – and in an unfavored left-back slot – Johnson admirably quelled any Villa attacks which threatened to start down his flank.

Despite starting each half brightly, Aston Villa gradually slipped back into a compact defensive shape as each period progressed. Aside from the early chance for Antonio, Villa limited West Ham to poor opportunities from open play throughout. Smith’s side showed some refreshing urgency to not only apply pressure to their opponents, but sprint back behind the ball after a turnover.

However, as the minutes dragged by, the match was played with a palpable tension as Villa appeared to play the game with an eye on results elsewhere.

With Watford losing to Arsenal, Smith opted to secure the point – when the scores were level at 0-0 – by bringing on defensive midfielder Marvellous Nakamba for his more attacking counterpart Conor Hourihane. This safety-first approach was not appreciated by some fans nervously watching on.

And, aside from the 60 second exchange of goals, Smith’s cautious tactics saw Villa earn a vital point.

In a game where every Villa player seemed (understandably) hesitant given the looming spectre of relegation reinforced every time Bournemouth scored a goal at Goodison Park, John McGinn was one of the few assured presences on the field.

The Scotland international snapped into the tackle and even undertook the risk of playing a pass forward which wasn’t launched miles into the air. And it was his calm delivery into the feet of Grealish which teed up his skipper for the opener.

Both clubs concluded the longest season with this final league game. However, neither will have long to wait for an opportunity to avoid these relegation woes next season as the 2020/21 campaign begins on 12 September.