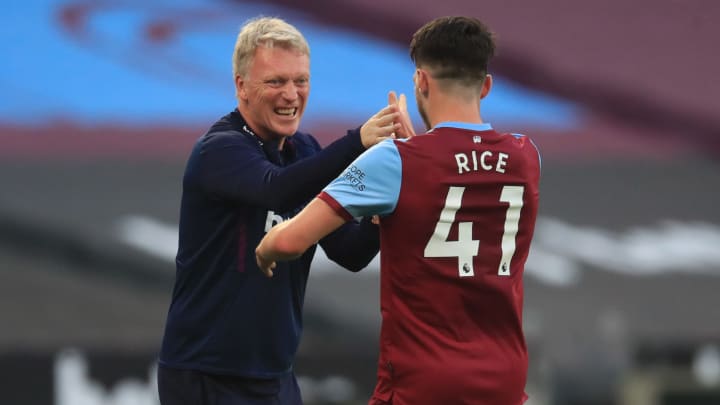 West Ham manager David Moyes has commented on the future of star player Declan Rice insisting that the midfielder won’t be going anywhere unless a club comes in with a huge offer.

The England international has won over a lot of his critics this season, with the holding midfielder impressing at the London Stadium in West Ham’s survival bid.

21-year-old Rice was an ever-present and consistent highlight for Hammers fans throughout the disappointing campaign. His decisive displays have fuelled speculation of a move to one of the Premier League’s top six, with Chelsea – the club he played for between the ages of seven and 14 -often linked.

Moyes though remains defiant in his stance on Rice, suggesting only a giant offer will tempt West Ham into a sale.

“Declan should have attention because he is such a good player,” the Scotsman said, via Football London.

“But, he’s not going anywhere unless you get one of those steel vans that have the cash in it. You better bring one of them.”

The Hammers finished with a final day draw with Aston Villa to end the season on 39 points, their lowest haul since they returned to the Premier League in 2012.

Rice’s season ended on a rather more positive note though, as the academy graduate was named Hammer of the Year for the first time in his short career. Fans of the east London side will be desperate for their main man to stay at the capital club for as long as possible and the financial implications of coronavirus may make that scenario more likely.

Moyes added: “He’s under contract and he’s going on holiday as far as I know, hopefully he’ll be selected for England as well and he’ll be back with us for pre-season in three weeks.”