Let’s face it, errors on the football pitch happen every day – but it’s the goalkeepers who are punished the most, with their misfortunes often leading to that all-important goal by the opposing side.

The 2019/2020 season hasn’t exactly been the most impressive time for Premier League keepers.

While Alisson and Dean Henderson are having excellent campaigns for their clubs, this list proves that even the best stoppers are destined to make a few mistakes now and again. Henderson’s mistake came at the beginning of the season, with his error leading to Liverpool’s marginal 1-0 win over Sheffield United in late September. The Blades were set to cause an upset at Bramall Lane, as the ?Reds failed to generate a shot on target for the first 69 minutes.

The English stopper had an impressive game for the majority of the match – but a lapse of concentration meant Georginio Wijnaldum was able to net one through Henderson’s legs, with the Sheffield United keeper letting the ball slip through his grasp.

The 22-year-old has since made up for his mistake, becoming one of the most highly-regarded stoppers in the Premier League – and a contender for England’s number one in the upcoming Euros.

Ok, so Leicester City’s 5-0 thrashing against Newcastle wasn’t entirely Dubravka’s fault. The Magpies were already down to 10 men after just 43 minutes, after Isaac Hayden got sent off following a dangerous challenge on Dennis Praet.

However, there were some questionable decisions which took place between the posts that afternoon.

Dubravka could have done better during Leicester’s second goal as Jamie Vardy netted one home at the near post. Three other goals followed, including an own goal by Paul Dummett, resulting in a pretty miserable fixture for the Newcastle side. 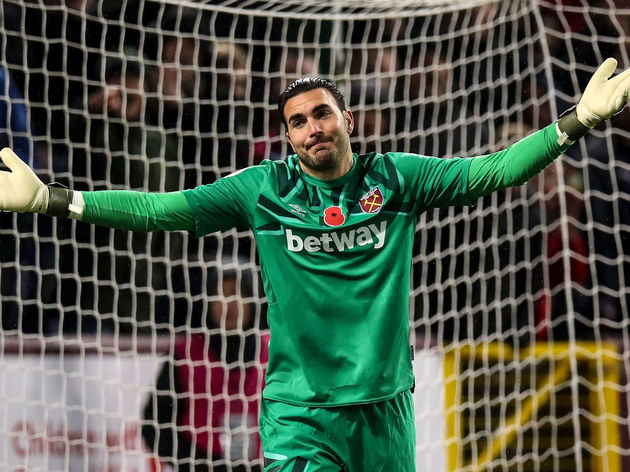 The Hammers practically gifted Burnley the three points in November, with their goalkeeper Roberto having the worst performance on the pitch. West Ham supporters lost all hope for the 33-year-old, after his set of costly mistakes in the Premier League fixture meant their side was left utterly humiliated at Turf Moor.

The Spaniard threw the ball to fellow teammate Fabian Balbuena while he was under pressure which led to the second goal, before punching the ball into his own net to make the final score 3-0 to the Clarets. Alisson has been practically flawless in his second season in English football. Practically.

During Liverpool’s 2-1 win against Brighton back in November, the Brazilian’s error could have cost the Reds dearly. Jurgen Klopp’s men were already two goals ahead by the half hour mark as it appeared to be another standard day for the men in red.

However, an uncharacteristic mistake by their number one keeper saw Alisson given the red card in the final 15 minutes, causing the boss to bring second-choice Adrian on in the final moments of the game.

The 27-year-old was sent off for a blatant handball outside the penalty area with the referee awarding a free kick to Brighton in the process, leading to their only goal and resulting in a nervy ten minutes for the hosts. Another keeper who isn’t exactly known for making many mistakes is of course, Manchester United’s David de Gea. However, the Spaniard’s error against Watford will go down as one of the most humiliating mistakes of the season.

The 29-year-old let Ismaila Sarr’s shot slip through his hands and into the back of the net, before failing to save a penalty by Watford’s captain Troy Deeney.

All in all, it was a day to forget for one of the Premier League’s all-time greats, allowing the Hornets to secure a huge 2-0 victory over the ?Red Devils. One keeper who is having a particularly tough time in the Premier League this campaign is Kepa Arrizabalaga. The ?Chelsea stopper has regularly been criticised for his lack of clean sheets and disappointing save percentage this season – and his game against Newcastle was arguably a low point for the Spaniard.

After barely having been tested all game, Arrizabalaga let late effort by Isaac Hayden slip past him, as the Blues failed to pick up a single point at St James’ Park. Vicente Guaita will be hoping to put the Sheffield United match behind him, with the Crystal Palace keeper gifting the Blades the only goal in the game, as the newly promoted side secured a 1-0 victory away at Selhurst Park.

The Spanish keeper completely mishandled Oliver Norwood’s corner, dropping the ball into his own net just before the hour mark, resulting in one of the most embarrassing moments of the season. It was enough to give Chris Wilder’s men the victory, with the hosts surely disappointed to get nothing out of the game.