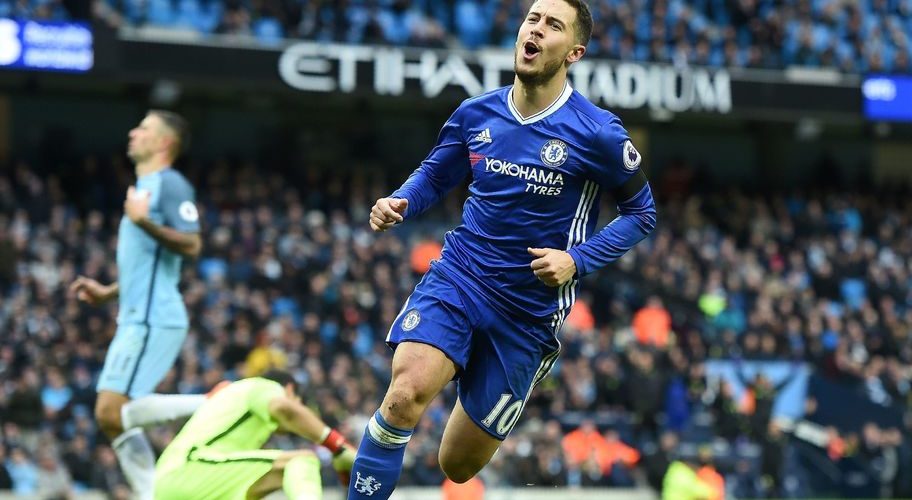 Antonio Conte’s Chelsea secured an eighth straight Premier League win at the Etihad Stadium with Manchester City losing the game and their rag after a fiery end to a fascinating encounter.

Victory sees Chelsea stretch their lead at the top of the table and praise was once again levelled at Diego Costa and Eden Hazard after both contributed fantastic counter-attacking goals to continue their fine vein of form this season.

Here’s five things we learned from the game.

5. Chelsea Are Electrifying on the Counter-Attack

The magnificent centre forward play of Diego Costa was the catalyst for a ferocious counter-attacking performance for Chelsea. He scored a Fabregas-assisted equaliser before setting up substitute Willian to end a pacy surge upfield.

Eden Hazard further demonstrated Chelsea’s counter-attacking proficiency with a burst of pace that left a helpless Kolorov for dead and smashed an unstoppable shot into the City goal.

Whilst Chelsea have been beating the lesser teams of the Premier League comfortably, they now have a blueprint for upsetting the best teams in the league on the break.

4. Cesc Fabregas Still Has a Role to Play

Cesc Fabregas produced an assist for Diego Costa’s equaliser that Jamie Carragher hailed as one of the passes of the season.

Antonio Conte had some encouraging words for the out-of-favour midfielder, telling SkySports: “He played a good game – I know I can always count on him”.

Nemanja Mati? was out injured for the City game and will expect to regain his place in the starting lineup, but Fabregas has certainly proved his worth for the league leaders.

3. Diego Costa Is Channelling His Anger Better Than Ever

Diego Costa must have been to some very expensive anger management sessions as he seems to be channelling all his passion in the right direction.

Despite some hefty challenges and physical battles with Otamendi, Costa kept his cool throughout and produced a goal and assist before being susbstitued late on.

Costa even acted as peacemaker towards the end of the match as things began to boil over. Chelsea supporters might have feared the worst when he ran to the scene of Aguero’s nasty challenge on David Luiz, but he shocked the Etihad with an unashamed display of diplomacy amongst the chaos.

A dramatic end to the game saw a frustrated Sergio Aguero vent his frustration with a shockingly late challenge on David Luiz, which he was rightfully sent off for alongside Fernandinho who had to be marshalled off down the tunnel.

It was a bitter end to a great game and Manchester City manager Pep Guardiola came across slightly ungracious in defeat, accusing English referees of confusing decisions.

“I was asked to come and train here and it is a pleasure to be in this country. But I just don’t understand the processes,” he told SkySports.

Aguero was sent off for a nasty lunge on David Luiz, but Guardiola surprisingly defended his main man by suggesting the striker was unlucky to be see red.

“Both players were strong there – that’s all,” he said.

John Stones had been left out of the two Premier League games prior to this one with Guardiola preferring to utilise him in the more languid Champions League matches in midweek.

It was a key test of whether the gifted ball-player, Stones, could match the ferocity of a determined Diego Costa and it was clear to see he could not.

John Stones lost his first physical battle against a very persistent Costa who refused to let Stones play his way out of trouble and from then on he was standoffish, allowing the Spanish striker to have it all his own way.

Whether he will start the next league game will be interesting with the young England international still with a lot to learn.

It was a day that went from good to bad, to worse, to catastophic for Manchester City.

They conceded three on their way to losing against rivals for the Premier League title and lost two key men for subsequent matches in Aguero and Fernandinho.

City had some fighting spirit but were outdone by Diego Costa who channelled his fighting spirit in the right direction. Guardiola’s next signing might be Costa’s anger management coach if he wants his team to keep their cool in the high-stake games this season.